The Yoshida wooblock print Castle of Himeji has been added to the gallery.

This chuban sized print is part of a set produced by Toshi Yoshida to demonstrate the woodblock printing process. I’ve only ever seen two sets of this woodblock print.

The other set in addition to the above prints also appears to have included a hanshita page. The hanshita is a very thin piece of paper that contains the artists design which is glued down onto the woodlbock providing the carver with the outline to follow when carving the block. The hanshita is thus destroyed by the carving process.

I don’t know whether the hanshita is ‘officially’ part of the issued set given its part of the carving process rather than printing process but it would be nice to have one.

The printing process set is shown below – hopefully in the correct order – please let me know if I’ve got it wrong. 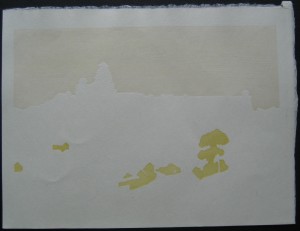 Castle of Himeji - The Finished Print