Toshi Yoshida produced three sets of woodblock prints for the Franklin Mint. The Friendly Garden (consisting of 3 prints), Birds of the Seasons (consisting of 4 prints) and a 12 print “calendar print” set depicting birds and flowers.

The official name for the 12 woodblock print series is “The Flowers and Birds of the Oriental Year” and was it produced in 1982. The Certificate of Authenticity for the prints says…

“This is to certify that the print accompanied by this certificate is one of 12 original Surimono woodblock prints in The Flowers and Birds of the Oriental Year collection created by Toshi Yoshida and issued in limited edition by the Franklin Gallery.

It is further certified that Mr. Yoshida has hand-impressed his personal signature mark on this work to indicate that it meets with his approval.”

Surimono translates literally into “printed thing,” and generally indicates a print that was privately issued or limited edition commissioned prints that are not placed on public sale.

I’ve not previously seen the entire calendar print set displayed together on the web before so have listed them here for reference (n.b. I don’t own this set).

The woodblock prints are chuban size with what appears to be the standard Yoshida/Franklin-Mint teak frames with rounded edges. Unlike the much larger sized Friendly Garden and Birds of the Seasons prints the mats are not silk covered. I don’t know if that’s usual or these particluar prints have been re-matted however the back board of the frames have a large label in kanji so appear to be original. Presumably this patricular set below was for the Japanese market. 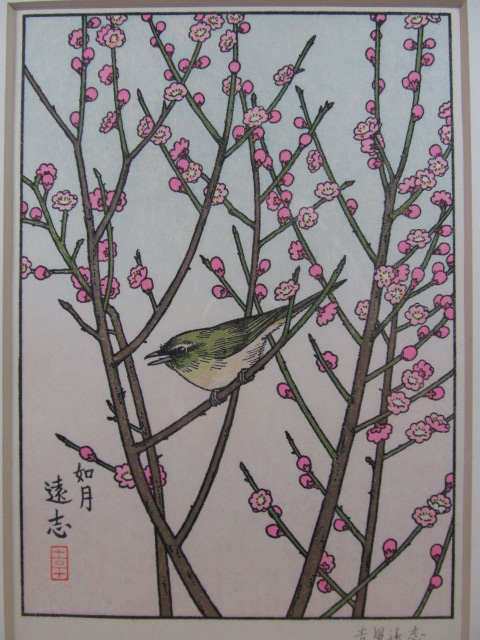 Seven of them are now listed on eBay with a starting pricing of $85USD. At that price the Japan auction winner (not me, I didn’t bid) will make a nice profit but they’re still good value to anyone interested in acquiring them. It’s a pity the Japan auction winner couldn’t get the full set to keep it together. The seven prints are the Japanese version with Kanji labellng on the verso and it will be hard to acquire the other five Kanji labelled versions to complete the set.

Interestingly (well to me at least) is that the new owner has been able to list them on eBay already. The same pics from the Japanese auction were used on the eBay listings but presumably the new owner doesn’t yet have the woodblock prints in their possession? (unless last nights buyer was also the seller).

Update:30/11/2012 – 6 Sold on e-Bay for $125 each!
It looks like six of the eBay auctions for these woodblock prints were converted from bidding starting at $85 to “Buy it Now” for $125 and they all sold to a single buyer so I expect that was done by arrangement.

The seventh woodblock print already had 1 bid so has been left to run. The prints initially sold in Japan on the 28th for about $50 USD each so for the six woodblock prints sold so far that’s a very nice profit of $450~ (before costs) for the seller. Not bad for something they owned for 2 or 3 days 🙂