The very rare print “Tokyo Port Wild Bird Park” by Toshi Yoshida has been added to the gallery page .

The print was produced in 1990 using woodblock print and zinc anastic plate. It’s a large print with the image size being 57 high centimeters by 39 centimeters wide and a paper size of 63 centimeters high by 45 centimeters wide. It was produced in a pencil signed limited edition of 100. A copy is held by the British Museum but unfortunately they don’t currently have an image available to view online. I’ve not seen an image of this print anywhere else.

The print was produced in conjunction with the Japan Print Association as part of their ‘One Hundred Views of Tokyo: Message to the 21st Century’ series of 100 prints by 100 artists. Over a period of 10 years starting from 1989, the association published a yearly box set of 10 prints. Each box set (and print) was produced in an edition of 100. Each box set was presented in a strong linen cassette (tatou album?) with a table of contents and each print was in it’s own folder with protective tissue and a short artist biography in Japanese. A number of different printmaking techniques were represented in the sets such as woodblock print, mezzo-tint, screen-print and etching.

Among the 100 artists who participated were other members of the Yoshida family – Hodaka (‘Police Box’) and Chizuko (“A view at the Western Suburb of the Metropolis – Rainy Season”). 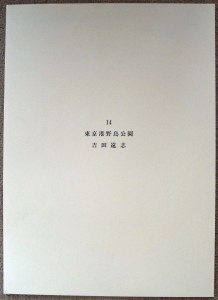